Warning: "continue" targeting switch is equivalent to "break". Did you mean to use "continue 2"? in /home/clients/30ba5c823daf6185630f9777a93b9a05/faireu.ecas.org/wp-content/themes/Divi/includes/builder/functions.php on line 5753
 ECAS and MPG contact EU Institutions to encourage EU mobile citizens to vote - FAIR EU 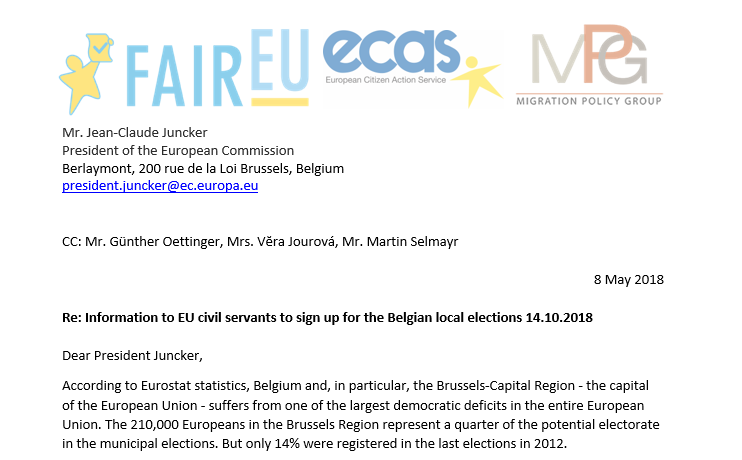 ECAS and the Migration Policy Group (MPG) have jointly submitted a letter under the FAIREU project to EU Presidents Jean-Claude Juncker, Luca Jahier, Antonio Tajani, and Karl-Heinz Lambertz. The aim of this initiative was to encourage them to help raise awareness of the municipal elections in October 2018. It illustrated the work of the VoteBrussels (led by MPG, in the framework of the FAIR EU project) and Think European Vote Local initiatives, who have been campaigning to encourage EU citizens to register to vote in the elections.

The letter strongly encouraged the institutions to help us spread the message, highlighting that their contribution would ultimately strengthen political participation in municipalities. The previous Belgian municipal election saw the lowest participation rate of EU mobile citizens, which were only 13.7% of the electorate. Many citizens have claimed this was because they did not receive the correct information in time. Many were unaware that registering to vote is a simple procedure, that it is possible to vote by proxy on the day of absence, and that it is equally simple to de-register after voting.

The letter illustrated the work of the two ongoing campaigns: VoteBrussels (led by MPG, in the framework of the FAIR EU project) and Think European Vote Local. The two campaigns recently published a brochure in three languages ​​(French, Dutch, English), A3 posters (in English) and a complete dossier (in English), all of which are available on this website.